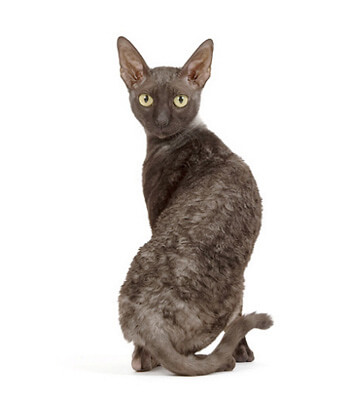 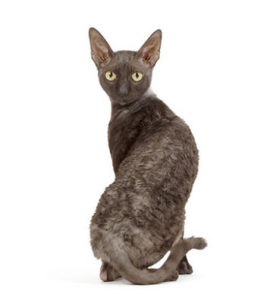 Cornish Rex cats originated in Cornwall, England, where one first appeared in a litter of barn cats in 1950. A cream-colored male, named Kallibunker was covered with tight rows of tiny curls, which gave him the appearance of a miniature lamb. With a slender body standing on long legs, a narrow head, enormous “bat ears,” and a long tail, Kallibunker was a true mutation. This curly coated cat was bred with Burmese, Siamese, and British domestic shorthair cats, resulting in a broad genetic base for the Cornish Rex breed.

The most unique feature of the Cornish Rex is their coat. Unlike most cats, Cornish coats do not have guard hairs and the hair lays in waves that can be tight or loose with an incredibly soft and silky texture. They have a slender, body which stands tall on its legs. This breed is referred to as the Greyhound of cats. They have a natural arch to their back that matches a tuck-up to their waist that flows into a long tapering tail. The Cornish has an egg shaped head and oval paws.  They have tall ears that sit high on their head, as well as oval expressive eyes with a slight upward slant and a patrician roman nose. They require little grooming, although they have a tendency to get greasy ears and toes. Females weigh 5 to 7 pounds and males weigh 8 to 10 pounds. They come in all colors and patterns such as solid to tabbies and with or without white.

The Cornish Rex are highly social cats and like to be right in the middle of everything and thrive on attention. They are extremely intelligent, attention driven, acrobatic and seem to never outgrow their kitten personalities. They are a very energetic breed that loves to play and have been known to retrieve toys like a dog. They do not like to be alone for long periods and enjoy having a companion. The Cornish is definitely a lap cat and get along well with other animals as well as children.

The Cornish Rex is generally healthy, but their coat offers little protection from the sun’s rays. They may also be prone to hereditary baldness.