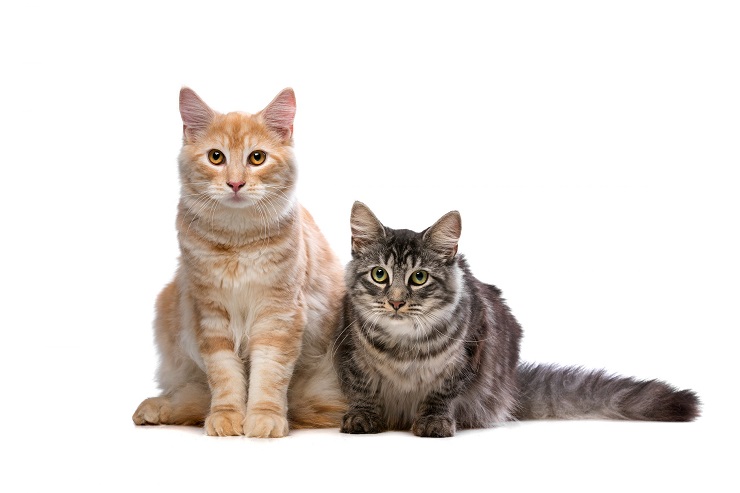 Have you ever seen a very large cat with a long coat and commented that they are a fine-looking Maine Coon, only to have their owner tell you that they are actually a Norwegian Forest Cat?

While Maine Coons are probably descendants of Norwegian Forest Cats imported from Scandinavia to the United States in the 18th century, there are actually a number of important differences between these two wonderful cat breeds.

Let’s take a closer look at the differences between these two cat breeds so you will be better able to distinguish between the two.

Both Maine Coons and Norwegian Forest Cats are large in size, but the former is significantly larger and is, in fact, the largest domestic cat breed.

Your standard domestic cat should weigh around 10 pounds, but even small Maine Coons will weigh twice as much. You should expect an adult to reach a weight of 18 to 25 pounds.

Norwegian Forest Cats are also much bigger than most domestic cats, but much smaller than their American cousins. You can expect a normal adult to reach a weight of between 12 and 20 pounds.

While both cat breeds have a noticeably long and fluffy coat, the Norwegian Forest Cat has a thicker and more protective coat.

The Maine Coon has a soft, short undercoat which is covered with a longer coat of silky hair that is water repellent. This longer coat is most prominent around the neck, belly, shanks, hind legs, and ribs.

Meanwhile, the Norwegian Forest Cat also has a double-layered coat, but it is evenly spread all over the body. It is even more robust and water-repellent because it has evolved to protect the cat from the Scandinavian cold and snow.

Both coats can be of any color, and there are many different colors recognized for each breed. However, the exact selection of colors available to you will depend on the country you are in.

The longer hair of the topcoat is also prominent on the tails of both cats. However, while the Maine Coon’s tail tends to be fluffy and sticks up in the air when the cat walks, the Scandinavian breed has a more sweeping tail that snakes along behind them.

The Maine Coon has a square head with a square, slightly elongated muzzle. This is complemented by high cheekbones, which gives the cat a soft concave curve above the muzzle. They also have large, oval-shaped eyes that usually have a dramatic lynx tip, as well as lynx ears set high on the head.

Meanwhile, Norwegian Forest Cats have a more triangular face with a straight nose and a flat forehead, making them look a bit more like a normal, domestic cat. They also have more open, almond-shaped eyes, and while they have lynx ears, they are lower down, following the triangular shape of their face.

Both cat breeds have strong and muscular physiques, but the American breed’s power is more focused in their broad and powerful chests rather than their legs.

The Norwegian Forest Cat, on the other hand, is more powerful in the legs, with their hind legs typically being slightly longer than their front legs. 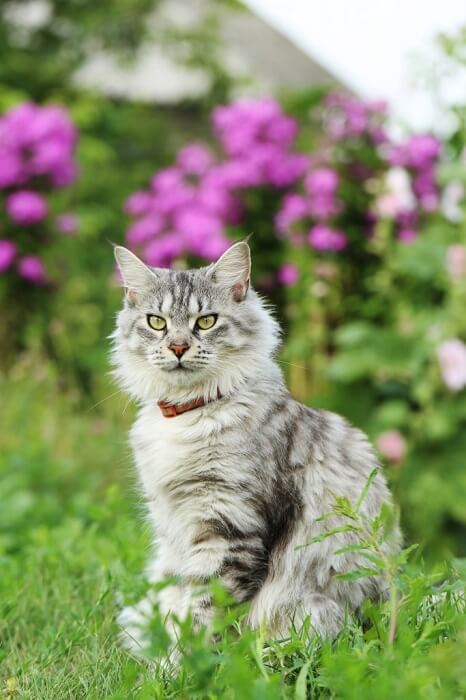 Both cat breeds are highly intelligent. In fact, Maine Coons are so intelligent and compliant they can be trained to respond to commands and even do tricks, similar to a dog. But while the Norwegian Forest Cat are just as intelligent, they are not as obedient, and they are therefore more difficult to train.

This is the major difference between the personalities of the two breeds. Maine Coons are loyal and personable.

They like to be with their owners all the time, and they like to show affection and to be stroked. They are also very playful and energetic.

Norwegian Forest Cats, on the other hand, are more independent and less loyal. They are also known to be on the lazy side. Throw a ball for a Maine Coon, and you may have kicked off an unending game of fetch.

The smaller breed is just going to watch that ball roll past them and go back to whatever it is that they were doing beforehand.

You can learn more about cat behavior here.

The Maine Coon and the Norwegian Forest Cat are closely related breeds, so it is easy to confuse them if you don’t know much about these big, fluffy felines.

However, Norwegian Forest Cats have longer hair all over their bodies, almond-shaped eyes, and stronger hind legs. The Maine Coon is quite a bit bigger, more playful, and friendlier, and the breed has distinctive lynx-like eyes.

Are you the pet parent of either breed? Share your experiences with the breed in the comments section below, or tag us on your favorite social media channel.

Is a Maine Coon bigger than a Norwegian Forest Cat?

Is a Maine Coon a forest cat?

It is suspected that the Maine Coon is a descendant of Norwegian Forest Cats, which were imported to Maine in the 18th century by Scandinavian settlers. However, the connection is not definitively proven.

How can I tell if my cat is a Norwegian Forest Cat?

If you have a large, furry cat and you aren’t sure whether they are a Maine Coon or a Norwegian Forest Cat, look at the shape of their eyes. The former have lynx-like eyes, while the latter have almond-shaped eyes.

Also, look at the tail. The American breed’s tail is fluffy and tends to point up into the air. The hair on a Norwegian Forest Cat’s tail is even longer, and it tends to snake along behind them.