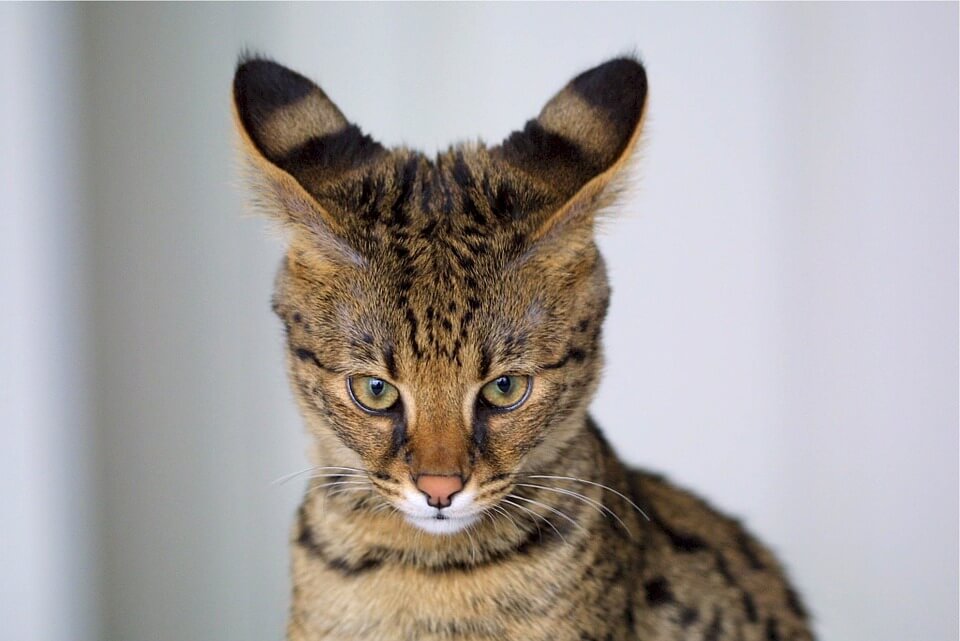 The Savannah cat is a cross between a domestic cat and an African Serval cat. The first successful breeding of a Savannah Cat was accomplished by Judee Frank with a male Serval and a domestic Siamese cat in April of 1986. The unusual cross became popular among breeders at the end of the 1990’s and in 2001 the International Cat Association (TICA) accepted them as a new registered breed. In May 2012, TICA accepted it as a championship breed.

A Savannah’s exotic look is often due to the presence of many distinguishing Serval characteristics. Most prominent of these include the various color markings, tall, rounded erect ears, long legs, broad noses and hooded eyes. The bodies of Savannah cats are long and leggy with  prominent shoulders.

The small head is taller than wide, and it has a long, slender neck. Behind the ears is a central light band bordered by black, dark grey or brown, resembling an eye-like effect. Their short tail has black rings, with a solid black tip.

The Savannah cats eyes are blue while they are kittens and may be green, brown or gold as an adult. The eyes have a crescent shape, with a hooded brow to protect them from harsh sunlight. Cheetah like tear markings run from the corner of the eyes down the sides of the nose to the whiskers.

The Savannah cat is often compared to dogs in their loyalty and will follow their owners around the house. They can also be trained to walk on a leash as well as fetch. Some Savannah cats are said to be very social and friendly with new people and other cats and dogs, while some may run and hide or even hiss when seeing a stranger. It is a very curious, assertive cat that seeks adventure. They are very active cats that need a a lot of interaction with humans or a companion cat. They are not lap cats, but will show affection on their own terms, usually by greeting humans at the door, or giving frequent headbutts. Many Savannahs love to play in water and most love to play games such as fetch.

Savannah cats are known to jump on top of doors, refrigerators and high cabinets. Some Savannah cats can leap about 8 feet high from a standing position. They are very inquisitive. They often learn how to open doors and cupboards and owning one can mean taking special precautions to prevent the cat from getting into trouble.

Genetic testing is crucial to avoid development of breed specific ailments long term in Savannah cats. Reproduction is very difficult and fertility rates are low, averaging 1 to 3 kittens. Intact cats are often infertile due to genetics. Savannah Cats do not require any specialty health care.